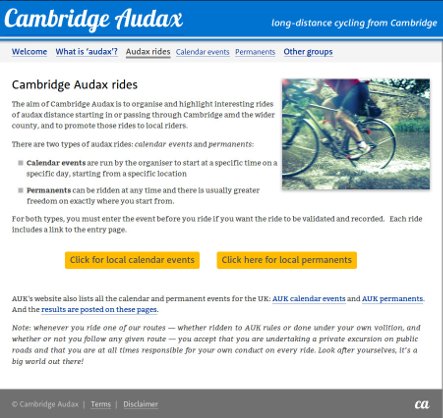 Riding an Audax is a unique experience which attracts a diverse and mutually supportive crowd. The atmosphere typically feels quite different from sportives, with an emphasis on finishing the ride within the time, rather than on moving pace and Strava palaver. Steel fast tourers rather than carbon bling are de rigeur (though not compulsory), and you may spot some more unusual machines and even the occasional pair of SPD sandals (although I have to confess some audaxers seem to think I’m a bit odd for wearing them...) But that doesn’t mean it is “just a tour”. The clock keeps running even if you have stopped, and routes, like the “Bryan Chapman Memorial” 600km ride from one end of Wales to the other and back, can be challenging. The classic Audax distances range from 200-600km (though many organisers also offer shorter rides) and some rides are even longer. The oldest and most famous of these is the 1200km Paris-Brest-Paris, which runs every four years and will have its 19th edition between 18th and 22nd August 2019.

PBP dates back to 1891 and in its early years was promoted by Henri Desgranges, perhaps more famous for his role in another long established French ride! To qualify, riders have to complete a “Super-Randonneur” series of 200, 300, 400 and 600km rides in the months before the start. A number of CCC riders (including multiple PBP ancien Terry Dickerson) have ridden it over the years, and several have qualified this year. Nick Jackson (another multiple finisher) and I, alongside several other Cambridge-based riders, will be on the start line in 2019, hoping to finish the ride in 90 hours or less (in Nick’s case, riding with the elite “vedette” group, the time limit is just 80 hours).

But you don’t need to aim for PBP to enjoy an Audax ride. There’s a busy local schedule of rides, which you can find on the excellent CamAudax website (click on the image). Look out for example for the Cambridge Autumnal 200km ride in October, and, not so far away, the Winter Series organised by Audax Club Mid-Essex. The latter rides are 100km and make a good day out, riding to the start from Cambridge. And looking ahead, you don’t need to wait four years for the next running of PBP for a really long ride - London-Edinburgh-London will be on in 2021, all 1500km of it.

Go to the Audax UK website for further information and details of future events.

See the standing of Cambridge CC in the Club Points Table